Lionel on Podium at Sussex

Steiners on the podium

Edo is on Podium at Elite U17

Another Day, another podium for Steph

Steph on the podium in Paris

Silver and Bronze at London Region

Congratulations to Pamela Schermann on her Silver medal and Darran Milne on his Bronze at the Capital Open 2021! 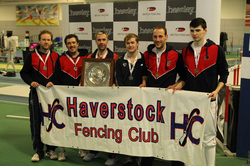 Haverstock’s fencers made it a winning hat-trick at the Beazley National Championships in Sheffield – as well as taking the silver in an all-Haverstock final.

Haverstock have a proud history of excelling at the national tournament, and this year was no different as the men’s team of Greg Allen, Nick Perry and Gareth Thomas defeated all-comers to collect the club’s third national team title in a row.

In the final they overcame Haverstock’s second team – made up of Alistair Gerrard, Toby Blench and Jason Retter – who had fought their way through tough opposition to meet their clubmates in a climactic duel.

In the individual competition, Perry fenced well to earn himself a bronze medal, narrowly losing to the eventual champion.

Gianluca back in the Elite

Gianluca Farina marked his return to the big time with a well-earned bronze medal at the Autumn Elite Epee event. The event was the toughest domestic outside the British Champs this year and only World No. 25 Jon Willis could best Gianluca. Another fine medal for the club.

Lorenzo Paolosini won his first ever Open even in Britain with success at the Bedford Open, improving on his silver of last year.  Greg Allen also nabbed a bronze medal, after Lorenzo knocked him out in the semi-finals. Forza, Lore!

Jonny May just missed out on retaining his Junior National Championship, but could content himself with a silver in a typically excellent Haverstock effort.

Not long after his first medal for us, Matt Dalton secured his first ever Open win with victory in the Ashton Open. Great work sir.
This means with the season only a month old Haverstock have already reached double figures in medals and medallists, which is incredible.

Bronagh treats herself in Sussex

Bronagh Keppler treated herself to a late birthday present with a well earned bronze medal at the Sussex Open. Top effort.

After individual success, Jimmy teamed up with Alastair Gerrard and the rest of the England team to help win the Gold medal in the team epee at the Commonwealth Championships. Outstanding effort team.

Jimmy and Jayne mine bronze Down Under

Jimmy Thornton and Jayne Crook both secured excellent bronze medals for England in the individual Men's epee and Women's epee at the Commonwealth Championships in Melbourne, Australia, extending Haverstock influence to the other side of the World. Well done people.

Nick and Jayne take on the World

Congratulations to Nick Perry and Jayne Crook, who have been selected to represent Great Britain at the World Championships in Paris this November. Good luck to both of them.

Haverstock made entirely of win 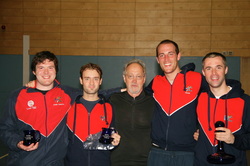 The club has decided that all Haverstock finals are old-fashioned and went for a clean sweep of the medals at the Bristol Open instead. To demonstrate our strength in depth even further, the four medallists were different from the Essex Open finalists. Greg beat Nick in the final to take a 2-1 lead in their ongoing final head to heads. The fencing was of such high quality that some passing guys wanted to interview Alessandro for a magazine they are producing. The medallists (Jimmy, Alessandro, Nick and Greg, l-r) can be seen posing with Barry Paul, MD of Leon Paul, the club's sponsor and leading fencing equipment manufacturer.

Not content with winning at the senior level, the club gained yet more hardware with Jonny May winning the BSC event at Hampton, one of the key domestic events for selection for the Junior British team and an excellent warm up for the forthcoming British Junior Championships. Well done Jonny. 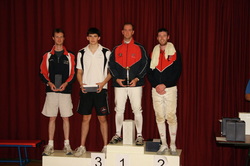 The start of the 2010-11 season started off with Essex Open back as the traditional curtain raiser and once again there was an all Haverstock final. This time the finalists were Chris Kelly and Mike Skipp. They were both had tough routes to the final but fought off all competition and their own fitness struggles to meet at the end. Chris proved strongest, but Mike was delighted with his best ever finish in a Open. The photo shows them atop the podium with their trophies.

2009-10 was another amazing year for Haverstock that saw the club win another hatful of medals.

At the domestic level, Haverstock won at least 20 medals for a top 3 finish during the season, with 5 Senior Open victories, three all Haverstock finals and two clean sweeps of first, second and third.

A great effort from everyone and let's hope for more of the same next season. 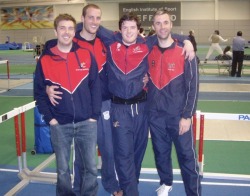 The men's team of Alastair Gerrard, Nick Perry, James Thornton and Greg Allen (l-r) were victorious at the British Team Championships winning a thrilling final having been trailing early on.
They were helped no end by James putting his freakishly long arm to good use (see photo)!
This means that Haverstock have now been British Team Champions a massive ten times since 1997. Well done guys.

Ladies team up for Silver 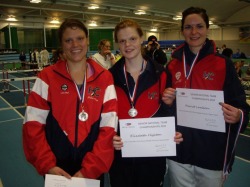 Greg Allen fought through a tough draw to finish in a well deserved third place, losing to the eventual champion by one point. The rest of the club had a reasonably strong showing too, making up a quarter of the Last 32 finishing places.

Lorenzo Paolosini picked up yet another medal to add to his collection for this season with a well earned bronze at the Chichester Open.

Matt Dalton picked up his first medal under Haverstock colours at the Cambridge Open Air, ending with the silver. Well done Matt.

Alastair Gerrard won the inaugaral Elite Open Epee and James Thornton took bronze ahead of a strong field that saw lots of upsets on the way. This was Alastair's first win under Haverstock colours and meant that it was the club's fifth win in a Senior Men's Open and fourteeneth Top 3 finish this season. Top work guys. 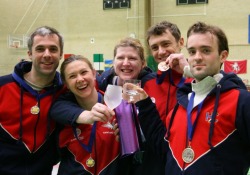 Another competition, another set of medals for Haverstock. On this day Alessandro Lazzati proved to be the Capo di Tutti Capi of our Italian contingent, bringing home the silver medal. Lorenzo Paolosini was an excellent third and Greg Allen L8. For the ladies, Lucinda Gallant added to her growing medal collection with an impressive third place and Caroline Nickerson celebrated her first fencing medal with a L8 finish.
The proud medallists are shown above with their hardware.

Nick Perry storms to the top eight in Tallin

Nick Perry had an awesome weekend in Estonia, taking eighth place in the Senior World Cup. On his way to the quarter finals, he beat three of the World Top 50 fencers including a remarkable victory against the reigning World Champion. Congratulations Nick.

Jonny May finishes in the top eight in Basel

Jonny May had another great result with eighth place at a tough Junior World Cup in Basel, Switzerland. The result confirms his position as the British Junior No. 1 and qualification for the Junior World Championships. Top Work.

Haverstock sweep up at Slough 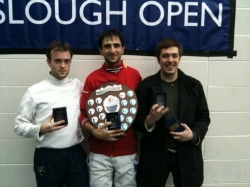 Haverstock kept up the club's excellent run in domestic competition, with the third consecutive all Haverstock final in a major open and the fourth win of the season. This time Gianluca Farina managed to retain the title he won last year, beating Alessandro Lazzati in the final. Alastair Gerrard completed the set with third. Well done guys.

Congratulations to Greg Allen who came out on top against Nick Perry in a reverse of the London Open Epee final.

Alessandro Lazzati completed a full set of medals for the club, taking bronze. Jonny May was 5th and in total Haverstock accounted for 12 of the top 32.

In the ladies event, Harriet Lamborn was an excellent 5th.

The club was so dominant throughout the day, we even won the raffle.

All Haverstock final at the London Open Epée

Congratulations! A great result and fine victory over Tom Cadman in the final. Ben fatto!

Congratulations to Jonathan May who was placed 5th in the FIE Junior Men's Epee World Cup in Luxembourg (Sept 2009). An excellent start to the season!

Haverstock fencer, Sara Spence, 41, won the national veterans’ women’s épée championship at Gloucester’s Oxstalls Tennis Centre. The format for these championships, which are open to all fencers over the age of 40, is two rounds of poules, in which groups of six fence each other, followed by direct elimination. This stage involves scoring ten hits within six minutes with a one-minute rest after three minutes.

Only seventh seed after the poules, Spence reached the quarter-finals without much difficulty, but then had a hard-fought match against Kate Morwell-Neave, of Canterbury, before narrowly winning 5-4.

In the semi-finals, she established an early 6-0 lead over former world veteran silver medallist Clare Halsted and held on to win 10-4. A similar pattern emerged in the final against Jane Clayton, as Spence dominated from the start to win 10-4 and collect her first national title.